The History of Our School

Oida Christian University is a multi-cultural multi-denominational and multi-ethnic institution dedicated to prepare men and women to fulfill the calling of Christ and the church.

We use the authority of the Scripture as the foundation to equip and prepare for the ministry. Oida Christian University strives for excellence in all the ministries in the service of Jesus Christ under the direction and power of the Holy Spirit.

We can be reached during the following hours:

Closed from Saturday to Monday

You can still send an email to our institution after duty hours. 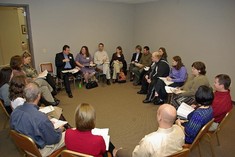